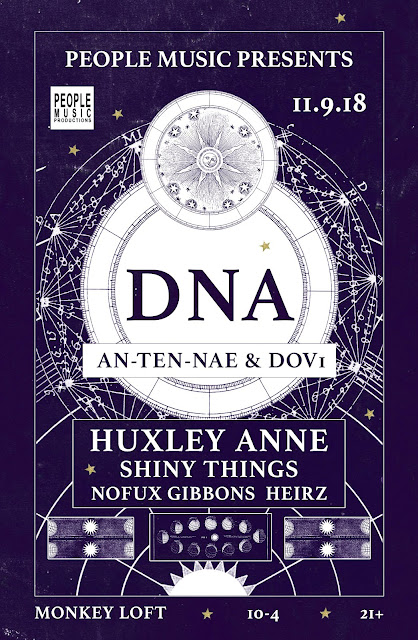 Dov1 & An-ten-nae are two of the most active movers and shakers in the west coast bass music scene, combining forces on production for the first time in 10 years since their first release under the name DnA.In the past 6 months they have released 3 EPs of diverse bass music, blurring the lines between Halftime DnB, Drum & Bass, Trip Hop, Hip Hop and even some Reggae, working with the the mighty King Mas.

An­ten­nae is a constant production machine, who has created new avenues for bass music under his various monikers, including Dimond Saints, Invisible People, Lowriderz and Black Crow. An­ten­nae has over 100 releases under his belt and collaborations far and wide. His most recent album charted in the iTunes Top 10 and was featured on Huffington Post and Billboard.

Dov1 is one of the pioneers of bass music in the San Francisco Bay Area.He is a prolific DJ, performer, label owner and music and talent selector for many labels and clubs nights. Known largely for his role as founder & owner of Muti Music and helping define the sounds coming out of the US west coast. As a producer his sounds are rooted in heavy bass and a blending digital and organic textures. Previously reviewed and featured by iDJ, Mixmag, Knowledge, CNET and a widerange of quality publications, and his work at the root level of the Bay Area music scene makes his influence is felt from the underground upwards.

Huxley Anne’s live sets are always fresh & original, pushing the boundaries between jazz, bass, and experimental music, largely influenced by the LA beat scene. Composing ethereal electronic music that evokes lust, pain, and movement akin to Burial, with an edgy hint of punk that creates trembling bass lines in the vein of EPROM & Jlin, Huxley Anne identifies an electronic artist. Surrounded by nature as a child, she spent her formative years studying ballet, playing in bands, and working on her three forms of expression—-music, movement, and visual art. Her music stands out, fusing elements of abstract hip-hop, heavy bass, experimental electronica, and textural ambience to create a new genre that plays smoothly in an art gallery or seduces you at the club. With her minimal gothic aesthetic, and shy persona, she often finds herself behind the synths on stage, or dancing, well-hidden behind the veil of her own projections.

SHINY THINGS come from dirty places: rolling in rave dust since childhood, the colorful vibes awoken during prepubescent trips in the desert have transmuted into some of the future sounds of today. From the interior groves of the west coast, this one’s a contributor; when not on stage you’ll find him on the floor, with glistening wits and moves for days. Selections all with good taste, these hyphy but paced, futuristic but deeply rooted psychedelic sounds are delightfully hype at any hour.