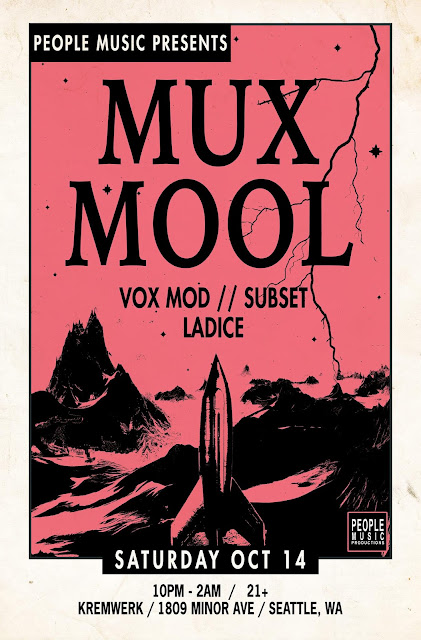 Artist Bios:
Mux Mool - Denver
Ghostly International
http://fakebananaco.com/#/music-1/
Skirting the edges of a hundred peeling stickers on dusty bins in forgotten record stores, Mux Mool didn’t set out to throw critics into a labeling tizzy—he just makes what sounds right. Jagged broken beats slip-slide across circuit-bent, pitch-shifted synths in a dystopian wasteland of 90’s nostalgia. The Mux Mool arsenal is a moody collection of instrumental dynamism vacillating between the serious and the silly.
He made his public debut on Moodgadget’s compilation, Rorschach Suite, with his track “Lost and Found” followed by an appearance on the Ghostly International and Adult Swim compilation Ghostly Swim with the ever-popular track “Night Court”. Lindgren found his audience amongst the neo-nerd ne’er-do-wells raised on junk food, taurine, and Adult Swim bumps. In a country steeped in pop and technology, a music geek with computer knowhow and cheap keyboards smashed the gatekeeper model with sonic sketches that went viral. His early work slipped onto “best of” lists in the mid-2000’s alongside fellow Swim alum Flying Lotus. Two Drum EPs and two full-lengths (2010’s Skulltaste and 2012’s Planet High School) cemented his Ghostly standing among the crate-digging elitists of the hip-hop world, but the nascent bass music movement latched onto the nomadic beatsmith, aligning him with the wonkier, brainier echelon of producers.
Brian Lindgren has been on the move from the beginning, hitting classy corners of happening neighborhoods, from Minneapolis to Brooklyn to Ann Arbor—dipping his toe into each burgeoning metro area, and soaking in the creativity that emanates from a scene on the rise. Relocating to Denver, Colorado, the epicenter of all things electronic, Lindgren is hitting his stride in time with the city that now more than ever towers above the landscape of the entire industry.
Now exposed to a vastly different audience of post-adolescent sub addicts, Lindgren didn’t tune in, turn off, and sell out; rather, the cerebral subsonic alignment of his body of work put him right in the crosshairs of tastemakers who heard whispers of his name all along, following the release of his most recent album Appetite for Production. The kids just get it. The Mux Mool catalogue is a hand-me-down from the older brothers of the scene, outlining where we are and where we’re going.

"Scot Porter meticulously hand-drew, frame by frame, the animation for his music video “Iridescent Asteroid Mists.” By laying a piece of transparent acrylic between his legs and turning on a desk lamp, he carefully traced and redrew the fractal shapes that populate the remarkable video, full of cosmic choreography and strange geometry. Choosing to do this rather than use computer-powered animation shortcuts is emblematic of the singular kind of electronica Porter has been making under the name Vox Mod. In a genre populated by mechanistic beats and robotic tones, Vox Mod’s music sounds like organic chemistry. His recent LP, SYN-ÆSTHETIC, is full of bio-rhythmic pulses and warbles that might soundtrack the coolest science-class video on cellular evolutionary theory. Performing live, he pushes harder to connect than his laptop-gazing peers do, headbanging more than most rock groups. While his album drops references to the early-’90s dystopian cartoon Aeon Flux, Vox Mod’s music sounds more like a bioluminescent Utopian future."
-Kelton Sears, Seattle Weekly

Subset - Seattle
Noise Complaint
https://soundcloud.com/subsetgetsit
You can never be completely sure what you’re in for when you see Subset perform - even he isn’t too certain what to expect. Honing his craft over the past six years in the demanding and eclectic New York City scene, Subset has soaked up the variety of music NYC has to offer and developed his unique sound by finding ways to weave all of these loose threads together.

From his weekly bass music party at Webster Hall (BASSment Saturdays) to his renegade sets at festivals around the country to massive sets at Holy Ship!, Camp Bisco, and Burning Man, Subset knows just what to play to set the perfect tone, no matter the setting.

Subset has made his name and built a following in an unconventional manner. The usual formula for DJs is to lock themselves away in their studios and become antisocial while their hone their craft. Subset decided to flip the status quo and go hyper-social instead. He has spent the last six years building communities and developing close, personal relationships with those who enjoy his music.

BASSment Saturdays, the legendary bass music weekly Subset hosts and curates at Webster Hall, has become a home and a family for electronic music fans all around the Northeast. Some fans travel hours to be there every week, not necessarily for the headliners, but for the family and the vibes that inhabit that space.

Subset has also been an integral member of the Holy Ship! community known as Shipfam. For years, he has thrown countless preparties, afterparties, renegade sets, and meetups. In 2015, HARD recognized his aptitude for curation and event planning, and tapped him to curate his own stage at all Holy Ship! official preparties. In 2016, HARD recognized the demand that he had built over the last four years, and gave him sets on both Holy Ships.

As his reach expands, Subset is seeking to use his platform to continue and expand his curation, launching a monthly livestream series based out of TPA Studios in Manhattan as well as collaborating on new monthly parties around the US. Subset is also diving into the studio on the heels of his wildly successful collaborative remix of Destructo & Bot's SHIPFAM anthem. Expect more projects and a lot more new music in 2016!
"A shining ambassador of the more respectable side of dubstep." - Time Out New York